Cohen Veterans Bioscience is investing in research on a global scale that will speed the discovery of first generation diagnostics, treatments, and cures by improving the scientific understanding of the basic biological mechanisms that set the stage for these conditions 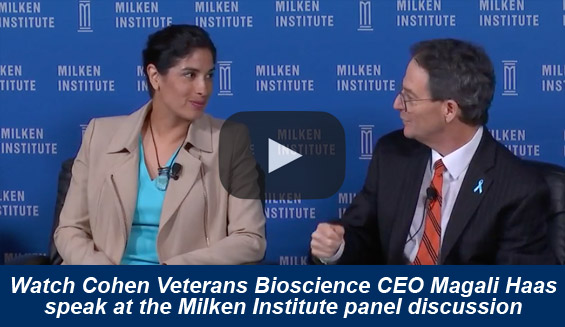 More military service members are dying after they come home than on the battlefield yet you won’t see them on the casualty list. Our heroes are killing themselves every day (at a currently reported rate of 22 per day) as a result of post-traumatic stress (PTS) and related mental health conditions. There are more post-911 veterans thinking of suicide and attempting suicide than pre-911 veterans. And, over 50% of post-911 veterans know a veteran who has committed suicide or attempted to commit suicide. And that is just the tip of the iceberg.

PTS can affect anyone who is exposed to a traumatic event’s√Ñ√Æincluding first responders, terrorist attack survivors, war refugees, and those suffering as a result of human trafficking and domestic abuse. In fact, approximately 8 million American adults’s√Ñ√Æboth civilian and military populations’s√Ñ√Æwill be diagnosed with Post-Traumatic Stress Disorder (PTSD) in a given year, according to the U.S. Department of Veterans Affairs’ National Center for PTSD.

Many will suffer for a lifetime.

Yet, despite significant unmet needs, science is what has been missing from the discussion. Investment in PTSD and TBI brain research has historically been inadequate, resulting in deficiencies in effective treatments. In 2015, the NIH combined budget for PTSD and TBI research was just $167M. The Departments of Defense and Veterans Administration have buttressed this with >$300M in funding for PTSD and TBI research.

Today, patients with PTSD usually present to primary care clinicians with unexplained physical and/or psychological symptoms, including sleep disturbances, night sweats, fatigue, and difficulty with memory or concentration. From a clinical standpoint, these are non-quantifiable measures. With no available objective diagnostic tests available individuals living with PTSD are often misdiagnosed or not diagnosed at all. But, even if diagnosed, the therapeutic armamentarium is inadequate. While psychotherapy is highly effective for many individuals it is often less effective in combat veterans and those with complex diagnoses. Despite effective treatment a majority of patients also continue to have substantial residual symptoms, and there has been no FDA-approved medication for PTSD in 15 years and none for TBI.

We can address the invisible wounds of war with integrated, evidence-based, precision medicine.

By investing in research. But not by the usual approaches.

First, we will need to invest, as we have for cancer, diabetes and cardiovascular disease, in understanding the biological mechanisms of PTSD, TBI and Suicide. We will need to adopt new approaches to ensure reproducibility and robustness of our science. We will need to utilize leading technologies to develop quantifiable measures and discover biomarkers and new targets for disease intervention. We will need to build co-operative alliance models that leverage mental capital and resources from leading academic institutions, citizen scientists, government and industry to execute a unified disease roadmap. We will need to incentive open-science and innovation.

Beyond bioscience, we need comparative effectiveness research, to objectively measure the impact and benefit of our programs and telehealth & biosensor programs to scale our reach.

Research and Clinical Care: Two Sides of the Same Coin

Cohen Veterans Bioscience believes we can change course not decades from now but within the next few years. As the only national nonprofit research institute focused exclusively on PTSD and TBI, we are investing in research on a global scale that will speed the discovery of first generation diagnostics, treatments, and cures by improving the scientific understanding of the basic biological mechanisms that set the stage for these conditions. Through generous seed funding from philanthropist Steven A. Cohen, Cohen Veterans Bioscience is investing more than $50 million in research programs over the next five years. With an additional commitment of $275M the Steven A. Cohen Veterans Network provides free mental health care to veterans and their families, to rapidly implement best practices and new discoveries. Research will inform clinical care but clinical care will also inform research one drives the other.

Advancing the science is the single best thing we can do to improve the delivery of care. Through integrated model systems like Cohen Veterans Bioscience and Cohen Veterans Network, and public-private partnerships, we can expedite both research and best practices for PTSD and TBI that will quickly move the discovery of treatments from the lab to the clinic.